General Electric is an American Fortune 500 company whose headquarters are based in Boston, Massachusetts. As of 2011, the company was ranked sixth in the United States in terms of revenue. The conglomerate operates in the following sectors: aviation, oil and gas, healthcare, capital, transportation, and home appliances. Despite the many different segments General Electric is involved in, the core of their business model is customer satisfaction, and this is especially evident in the design and production of their home appliances, including General Electric (GE) garbage disposals

Currently, General Electric offers a single line of garbage disposers, which range in size from 1/3 horsepower to 1 horsepower. Consumers may choose from among corded or non-corded options, and GE produces both continuous feed and batch feed models. Prices for their models range from $71.50 to $247.25 – depending upon from whom the garbage disposer is purchased from.

All of GE’s garbage disposals share the following features, for which they have won much praise:

In recent years, GE has made a concentrated effort to reduce the size of their carbon footprint, and of companies their size, they are among the first to do so. Each consumer who purchases one of their food waste disposer systems is also contributing to the fight for protecting our planet.

In 2007, it was estimated that almost 31.7 million tons of food waste were taken to landfills, and food waste compromised roughly 12.5% of all waste taken to landfills in America. These decomposing food scraps produce harmful methane gas emissions that are 21 times more potent than carbon monoxide. Furthermore, they contribute to the entrapment of heat within the earth’s atmosphere. Although some food waste that is sent to landfills can be incinerated, the process of incineration also produces harmful emissions.

GE believes that, considering the amount of food waste sent to landfills each year, lowering the annual amount of produced waste will consequently save energy costs for cities because it lowers the amount of refuse trucks that are required to transport the waste. Consequently, this lowers overall emissions and energy consumption from unburned fossil fuels. General Electric’s garbage disposals offer a convenient and environmentally conscious method of beginning to obtain this goal.

Is a General Electric Garbage Disposal Right For You?

When you purchase a garbage disposal from GE, you are making an investment in the environment, as well as your home. Which model you decide to purchase should be based upon the needs of your household. Before deciding whether a GE food waste disposer is right for your home, take some time to look over our reviews for their models, as well as those by other manufacturers, so you can make an informed buying decision.

We have reviewed a number of GE’s garbage disposals – both past and present models, and our goal is to offer you unbiased and accurate reviews. If you have any questions, or would like to see a review written for a particular model, don’t hesitate to contact us. We look forward to hearing from you. 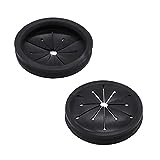 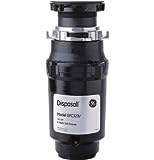 GE has several garbage disposers to choose from. Each of them varies in specifications and features. Although some are clearly better than the others, every disposer can potentially be the perfect appliance for your kitchen. In fact, GE has continued to make improvements in their line of disposers to meet the individual needs of consumers.

The effort can be seen in how they have tweaked their older models to make them even better. Check out some of them below.

The GFC520F unit is the older version of the GFC520V. It’s also a continuous feed type feeder with ½ HP motor. One notable difference between these two though is their grinding speed. The GFC520F runs at 2600 rpm while the more recent GFC520V can grind food wastes at 2800 rpm.

Also, they differ in their warranty. The newer version now comes with a 2-year limited entire appliance warranty which used to be just one for the older version. The rest of the features and specs are retained in the newer version--the large chamber capacity, splash guard, EZ Mount mounting type, 2 level precutter, stainless steel impellers, and jam resistance among others.

As you might have guessed, the GFC320V unit is the improvised version of the GFC320F. While both feature a ⅓ HP motor, they also differ in their grinding speed. The newer version can grind at a speed of over 2500 rpm which is significantly faster than the 1900 rpm of the previous version.

Other than what was mentioned, the rest of the features and specs of the GFC320 model remained the same. Simply put, the GFC320V is the same old GFC320F, but a tad more powerful this time.

The GFC530 model is a slightly better alternative to the GFC520 unit. First of all, the capacity of the GFC530 is in extra large size and it already comes with a sound reduction technology.

But, what’s new about the GFC530? The older version, GFC530F, is equipped with a ½ HP motor that runs at 2600 rpm. The improvised version, GFC530V, now has a grinding speed of 2800 rpm. Also, what used to be just a year worth of parts warranty is now extended to two more years.

There are a lot of disposal parts available, but some of the most important ones include the following:

Keep in mind that owning a disposer means preparing your home for the appliance. The preparation should start with your septic tank or sewer system. Make sure you have all these in place and in accordance with the policies in your neighborhood, town, city, or wherever you might be.