The General Electric GFC525V ½ Horsepower Continuous Feed Garbage Disposal is produced by General Electric, one of the most trusted names in home appliances. It boasts a high RPM and even greater torque, which grinds food waste more quickly and into smaller particles. With the advanced features and technology it features, the GE GFC525V (see today's price) is less likely to jam when compared to its competitors and offers a longer lifespan. This reduces the amount of time you have to spend maintaining the unit and enables you to get the job done quickly and move on.

With this GE garbage disposal, there is no need to spend thousands of dollars to have a professional plumber install it. It comes with GE’s patented EZ Mount system, which makes installation a breeze for even the most novice homeowners. The installation process requires fewer steps and parts than GE’s competitors, and GE’s patented Drain Boost technology assists in keeping your home’s plumbing free and clear of food waste by ensuring that your water runs in the correct direction. 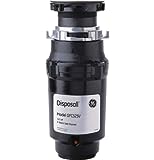 Being both a mechanical engineer and a homeowner, I have this habit of taking almost every appliance in my home apart to inspect its quality and to learn more about its design. It drives my wife absolutely crazy, and it’s not a practice I would recommend for anyone else since dismantling home appliances generally voids their warranties. However, when my new General Electric GFC525V ½ Horsepower Continuous Feed Garbage Disposal arrived, I simply couldn’t resist. Let me tell you something: the engineering and craftsmanship that went into the making of this garbage disposal is a work of art.

The disposal has angled stainless steel fins that pump ground food and water through your pipes at a much higher rate of speed than a traditional garbage disposal. This dual action keeps your home’s plumbing free of clogs and prevents food particles from depositing and accumulating. That’s impressive enough, but what really got me was the unit’s sound reduction technology. It includes a fully insulated sound shell, which ensures that the GFC525V operates quietly. Even when the disposal is running, my wife and I can have a conversation in the kitchen without having to yell at each other.

There’s another element of General Electric’s garbage disposals that I particularly like. In America, we dispose of about 25% of the amount of food that we prepare each year. When all of this food accumulates in landfills and begins to decompose, it releases methane gasses that are 21x more toxic than carbon dioxide. By reducing the amount of food waste that is carted to the landfill each year, we are helping the environment. (Off topic, I know, but General Electric is a big supporter of environmental sustainability.)

When you buy the General Electric GFC525V ½ Horsepower Continuous Feed Garbage Disposal, you are not only making an investment in your home, but in the environment as well. The GFC525V has been installed in my home for about a month now, and I have yet to experience any problems from it. It is a product that I would highly recommend to my friends and family members, and I expect that my wife and I will enjoy many years of reliable use from it.